This repeater has been outfitted with a 160' tower considered a lower profile tower than other repeaters but still has an impressive coverage. Its transmitted tower's physical location is in one of the higher points of altitude in Elkhart County. With this nearly 150' higher ground level and support by a receive site in Central Elkhart County at 300'+ This repeater can be virtually reached without any problems within and outside Elkhart County. Even if you're away from home you can access this repeater via EchoLink Node 645025.

K9DEW APRS I-GATE is located in the northeastern part of Elkhart County to provide direct and precise assistance to APRS users and viewers. This also allows K9DEW to announce special events, repeater locations, and even current weather located at its tower site. All of this available information can be obtained via Google Maps APRS.FI or any APRS capable device.

Automatic Packet Reporting System (APRS) is an amateur radio-based system for real-time tactical digital communications of information of immediate value in the local area. APRS data is typically broadcast on a single shared frequency 144.390 MHz to be repeated locally by area relay stations and digipeaters for widespread local consumption. In addition, all such data is typically ingested into the APRS Internet System (APRS-IS) via an internet-connected receiver (igate) and distributed globally for ubiquitous and immediate access. The shared information contains global coordinates, altitude, speed, heading, text messages, alerts, announcements, and bulletins. The most visible aspect of APRS is its capability of map display. Anyone may place any object or information on the map, and it is distributed to all maps of all users in the local RF network or to anyone monitoring the area via the Internet. Any station, radio, or object broadcasting GPS coordinates to the APRS system can be automatically tracked over time. Other prominent map features are weather stations, alerts and objects, and other map-related amateur radio volunteer activities including Search and Rescue and signal direction finding.

APRS has been developed since the late 1980s by Bob Bruninga, callsign WB4APR, currently a senior research engineer at the United States Naval Academy. He still maintains the main APRS website. The acronym "APRS" was derived from his callsign. 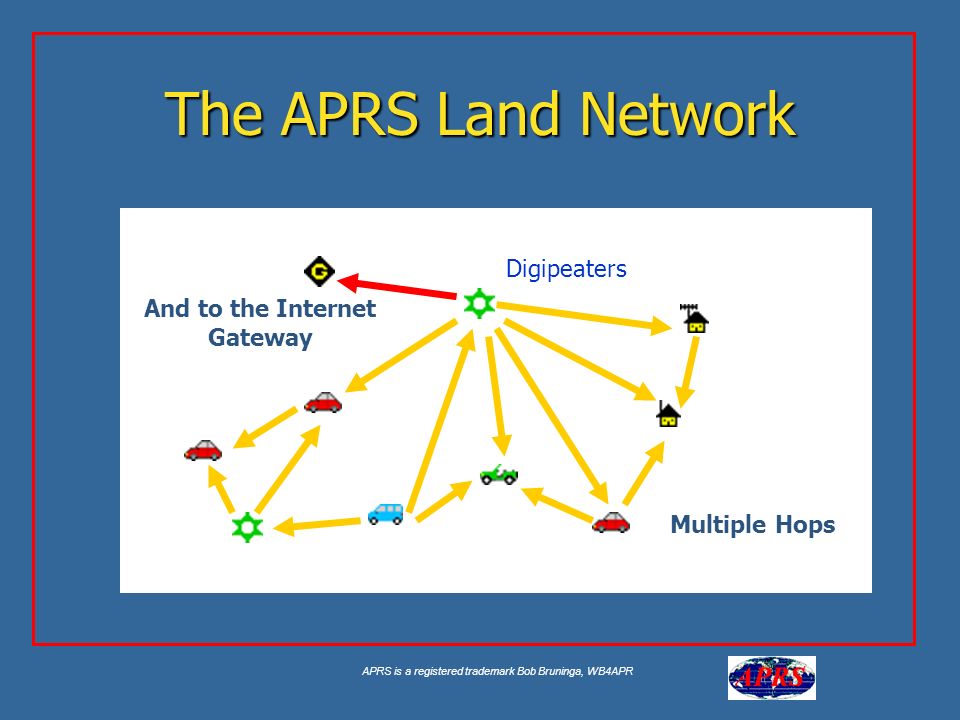